How to map an Active Directory external identity source to a universal group for Authentication Manager 8.x

The following tasks will be completed when following the steps in this article:
1.  Create a universal group in Active Directory.
2.  Add Active Directory users to the group.
3.  Map this group as a CN= in your identity source for Group Base DN, not User Base DN.
4.  Change the User Search Filter in the external identity source to include the memberof= search filter.  Note:  Using the memberof filter only works with Active Directory.  The memberof function does not work correctly in a SunONE/Oracle LDAP directory server identity source.  In SunONE, the users are placed into an OU instead of into a group then make the OU a part of the User Base DN and User Group Base DN on the Map tab when configuring the identity source (Operations Console > Deployment Configuration > Identity Source > Manage Existing > Map).

There are variations on how this process can be done, so test the configuration options in a development or pre-production environment.
The two users Jo Aaberg and Kvive Aaby from the example above would now be searchable in the Security Console under Identity > Users > Manage Existing under this new identity source: 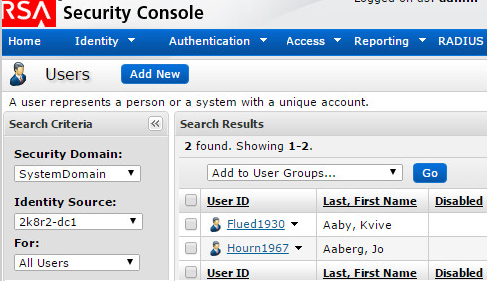 Image description
Tags (65)
0 Likes
Was this article helpful? Yes No
Share
No ratings