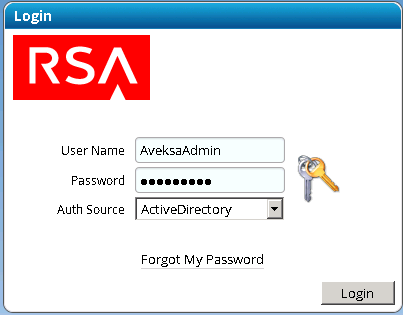 For users who have an existing session the console is unresponsive and although the menu's display if an item is selected the console shows Loading data... indefinitely.

The /home/oracle/wildfly-8.2.0.Final/standalone/log/aveksaServer.log shows the following exception.

An AWR report may show queries associated with logon active at the time of the problem, specifically queries in the SecurityContext.csv file.

The error BufferOverflowException is a generic error that may occur anytime the console is unresponsive and an existing http session is unable to receive data from the server.  This may be caused by other issues than what is described here.  If the error occurs along with the inability of the users to logon with valid credentials then the following problem may be suspected.

Customers using a custom SecurityContext.csv file may be more prone to this problem if there are complicated queries in the file that are processed during authentication.

This issue has been resolved in RSA Via Lifecyle and Governance 7.0.0 patch P05.

A change has been made that only locks the cache for the specific user that is authenticating and allows other user sessions to continue while the authenticated users authentication cache is being constructed.
Tags (23)
0 Likes
Was this article helpful? Yes No
Share
No ratings