​A Termination–Provisioning Rule set with actions to disable and delete the account(s) for each terminated user with associated accounts results in a pair of Change Requests.

This behavior is by design.

NOTE - This behavior of Termination Rule is by design irrespective of the actions taken.  Actions such as Disable/Delete Account do not have any affect on this behavior and are shown here only as an example of Rule configuration with actions.

For example, let's say you have created a Termination Rule with the following configuration (where no filter is used on a condition): 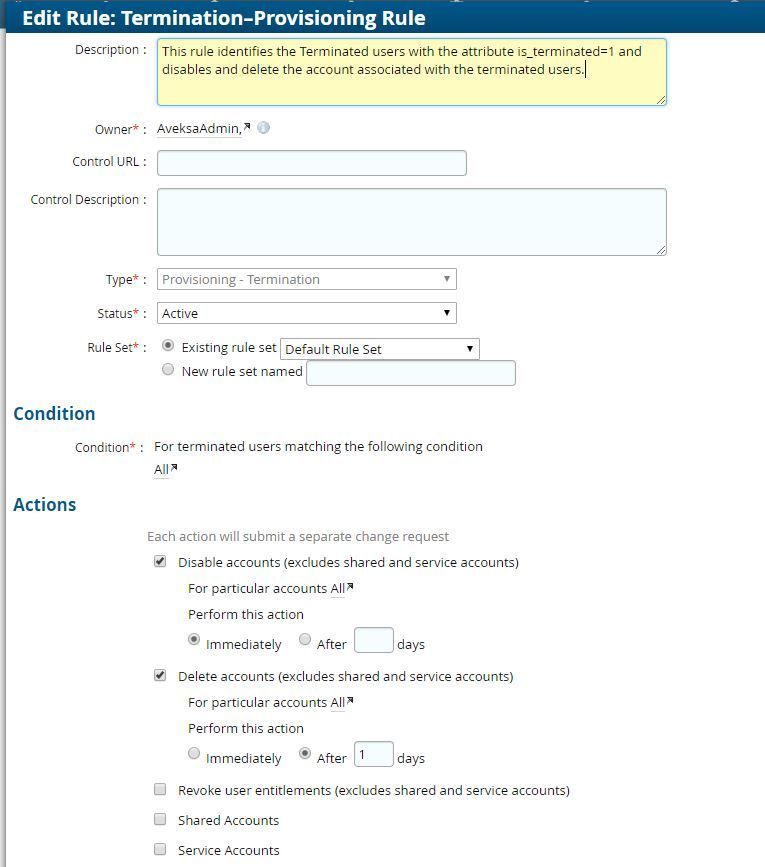 When you run an Identity Data Collector (IDC) that collects users whose termination status is changed (Is_Terminated=1), and then run the Termination Rule (Provisioning-Termination) for the first time (with or without filter), the rule will identify the terminated users as follows:

The result above shows that the rule has identified nine terminated users:
Processing Summary:

After this, if you update the Rule Definition with the condition updated as Is_terminated=yes (shown below) and run the same rule again, users will not be identified as terminated.

Image description
The result of the Rule run will show as:

These users will not be identified as terminated, since it is a different/next run and does not reflect as the updated status for "Is_terminated" attribute.
Tags (56)
0 Likes
Was this article helpful? Yes No
Share
No ratings