This RSA Identity Governance & Lifecycle knowledge base article is intended as an aid for diagnosing performance issues by displaying the Oracle Explain Plan for a given SQL statement.  An Explain Plan can be generated through Oracle Enterprise Manager (OEM). This document describes how to obtain an Explain Plain in the event that OEM is not available or access to OEM is not allowed.

This document is not a comprehensive article on the Explain Plan nor is it intended as a replacement for Oracle Guidelines and Documentation.

What is an Explain Plan?

When diagnosing SQL issues, especially performance issues, it can be very useful to understand how the Oracle engine is processing certain SQL statements. An Explain Plan is created to help with this understanding. Oracle's definition of an Explain Plan is listed below:

The EXPLAIN PLAN statement displays execution plans chosen by the Oracle optimizer for SELECT, UPDATE, INSERT, and DELETE statements. A statement's execution plan is the sequence of operations Oracle performs to run the statement.

The row source tree is the core of the execution plan. It shows the following information:

In addition to the row source tree, the plan table contains information about the following:

In the event that OEM is not available, it is possible to generate an Explain Plan from the command line using SQL*Plus or using a SQL tool such as SQL Developer.

If you have the SQL ID of the query from the AWR, login to RSA Identity Governance & Lifecycle as avuser and plug the SQL ID into one of the following two queries:

SQL ID is not available (SQL*Plus)

Login to RSA Identity Governance & Lifecycle as avuser, run the query and the SQL that generates the Explain Plan. Note the example below shows the spool command so the output may be sent to RSA Support. Leave out the spool

If you are using SQL Developer, you can obtain the plan by first selecting the query in question and then pressing the F10 key (or right click and click on Explain Plan...  An example of how to do this using SQL Developer is shown below: 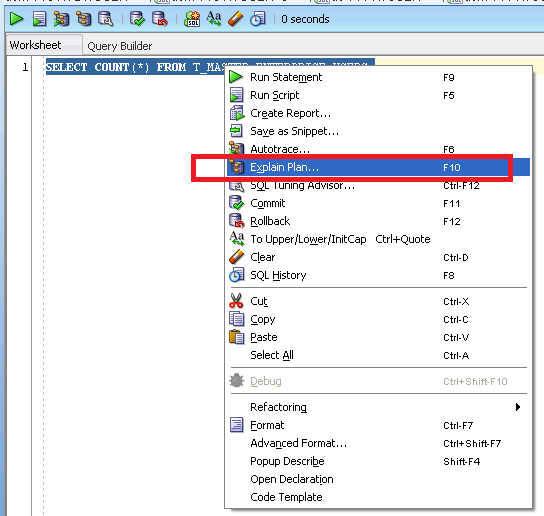 Tags (52)
0 Likes
Was this article helpful? Yes No
Share
No ratings