When attempting to commit a role change for an RSA Identity Governance & Lifecycle role that contains a membership rule the role commit fails.  The failure occurs no matter what type of change is made to the role. 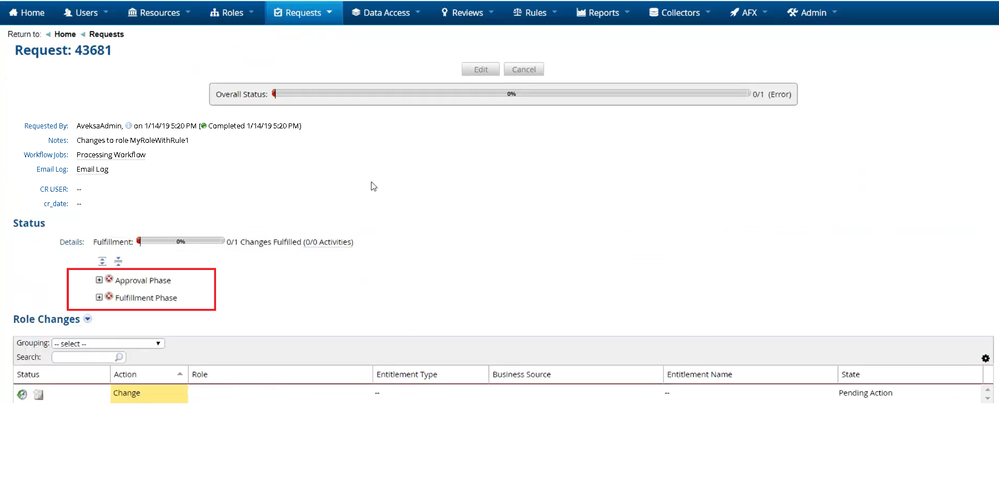 The aveksaServer.log file shows the following error relating to the Membership Rule.

Followed by a generic Workpoint failure.

01/14/2019 12:42:46.136 ERROR (Worker_actionq#Normal#WPDS_277) [com.aveksa.server.workflow.scripts.nodes.FulfillmentPhaseNode] Error Fulfilling by System com.aveksa.server.db.PersistenceException: Commit failed to proceed because the transaction was marked for rollback. Reverting the changes...

This issue is due to a incorrect reference in the database to an old role set ID that prevents the role from updating the rule associated with the role.

This issue is resolved in RSA Identity Governance & Lifecycle 7.1.0 P02.

See article 000036303 - Entitlements are removed or added to a role when role set is changed in RSA Identity Governance & Lifecycle.

This corrects the issue that causes the incorrect role set ID to be used for the reference to the role rule.   This issue will still occur however even in later versions if the role set was changed before patching.   If this issue still occurs after patching you should use the Workaround below to correct the problem role.

This removes the corrupted association with the old rule and will allow you to commit new changes to the role.

Tags (47)
0 Likes
Was this article helpful? Yes No
Share
No ratings