Find answers to your questions and identify resolutions for known issues with knowledge base articles written by SecurID experts.

How to understand SSL protocols and ciphers in Authentication Manager 8.x

Customers are trying to figure out if they need to enforce strict TLS1_2 mode in order to gain support for TLSv1.2, in Authentication Manager, the Self-Service Console, on the Web Tiers, as well as with integrations with API tools like Authentication Manager Prime and Authentication Manager Integration Service (AMIS).  This would also affect SecurID software token distributions to Apple iOS devices since the new App Transport Security (ATS) feature was released in January 2017 that requires SSL connections, such as CT-KIP, to use only TLSv1.2 with SHA2 signed certificates.

You enable strict TLS when your security scan flags insecure SSL protocols and your policy dictates they must be eliminated. Beware that there are implications when you do this.  For example, older Windows clients that do not support TLSv1.2 will not work, and this could affect RSA RADIUS in Authentication Manager 8.1 SP1.  If your scan flags insecure RC4 ciphers then plan your upgrade to Authentication Manager 8.2 to address that.

You can see RSA ciphersuites in the opt/rsa/am/server/config/config.xml, which has a section for various servers and the biztier server which control the RSA consoles.

If you look at this server's <ssl> section, you can see a list of ciphersuites.  Older Authentication Manager 8.0 or 8.1 servers will list ciphersuites such as TLS_RSA_WITH_RC4_128_SHA and TLS_RSA_WITH_AES_256_GCM_SHA256.

You can check your version of Authentication Manager two ways:

Use OpenSSL to verify presence of cipher or protocol

You can also use openssl to verify if a cipher or protocol is present.  Use one of the following commands:
or

Secure Sockets Layer (SSL) is a protocol developed by Netscape for transmitting private documents via the Internet.  It is based in part on asymmetric keys and the Public Key Infrastructure, PKI so that more efficient symmetric keys can securely be exchanged.

There are two issues here: 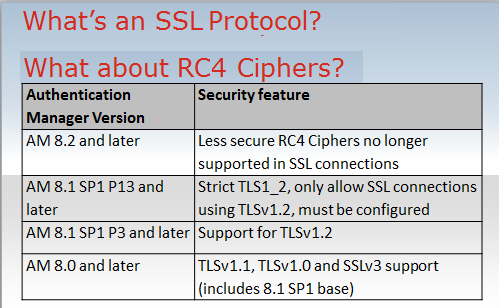 Some errors related to mismatch between SSL client and SSL server as to protocols or ciphers include the following: 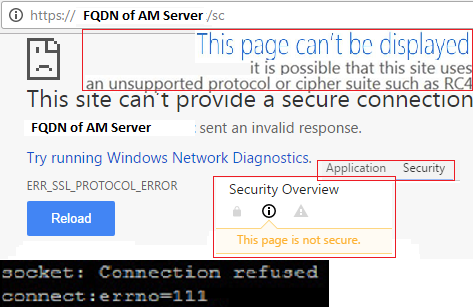 Tags (34)
0 Likes
Was this article helpful? Yes No
Share
No ratings